There are very few, if any, initiatives taken on by the private sector that essentially assist in training our police officers on the road to perform their job better. Government itself has little to no specialised subject matter training, specifically addressing the heavy commercial vehicle transport industry. For these reasons, the bringing together of and extensive number of subject matter specialist in the transport industry from academic to practical hands on specialist to provide free training is a regular occurrence of the Brake and Tyre Watch events put together by Fleetwatch, Patrick O`leary and his team.

It all takes place at a chosen venue, quarterly, where the various partners to the event from the private sector and some government departments come together and undertaken the two day session. It is a feather in the cap to Fleetwatch and the various key partners, who include Bridgestone, Wabco, BPW Axels, Standard Bank, HCV, Jost, SA Roads Federation, Mix Telematics, Imperial Road Safety, SANRAL, N3TC and Babcock DAF. There are other specialist like Mr Wolfgang Lehmann and Mr Dave Scott two stalwarts of the industry that form part of the specialist assisting to impart knowledge. These role players are stepping up to the plate and doing something about the problems and not simply standing by and making comments. There is no doubt that they are not seeking the recognition, rather choose to be a part, nonetheless, their involvement needs to be, and is recognised and commended.

The proven format to success is basic and on this occasion saw day one as an academic day,where extensive lectures were

presented to some 75 traffic offers from around the KZN Province. This initial academic day setting the groundwork of understanding for the practical day that follows.

Day two sees the practical day, where vehicles are physically pulled off and appointed groups along with the specialist examine and scrutinize the vehicles in detail, educating the attendees on the faults and problems, linking these to the requirements of the National Road Traffic Act. 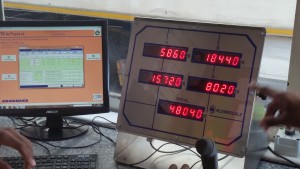 Over the past few years, through the same event held around the country, some 644 trucks have been test of which 434 have been discontinued, this equates to an absolutely shocking 67% failure rate. How can this be, it just seems impossible but is an absolute fact with this event yet again, and perhaps rather unfortunately, validating the stats. This session netted 10 vehicles being randomly selected from the N3, subjected to detailed scrutiny of all technical aspects, with only 1 vehicle passing. One other provided an opportunity to remedy minor issues and only thereafter passing. Of those that failed outright, multiple major and minor issues were identified on all the vehicles.

Interestingly, one rig pulled off for examination revealed a stolen trailer in tow, this also gives impetus to the issues raised of the importance of traffic policing in assisting in all aspects of criminal offences. Once again the horse and trailer being in poor condition; the driver was also indicated to be operating in South Africa as a Foreign National, illegally, arrested and charged by the authorities. 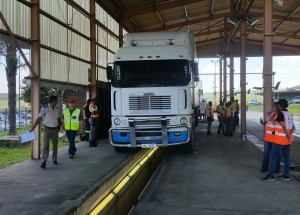 There was absolutely no doubt that the attendees thoroughly enjoyed the learning experience, with many even showing an interest in the detailed specifications of many of the technical aspects. Interestingly, the extent of the impact of the training sessions was brought home strongly by one of the attendees from the Durban EThekwini region bringing with statistics of the number of trucks pulled off for examination following a previous Brake and Tyre Watch session on the KZN northern area just a few months prior. The stats provided showed well over 1000 vehicles pulled off and some 88 suspended since the last event, clearly the officers were making use of the knowledge and confidence gained. 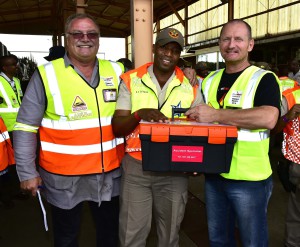 Accident Specialist is one of the proud role players in the event, assisting the attendees in learning about the heavy vehicles and linking this to the legal aspects of the National Road Traffic Act and the many associated specifications. This event saw Traffic Officer Gervas Biyase winning the commercial vehicle and crash scene basic inspection kit provided by Accident Specialist. He won the prize after his initial selection to an identified shortlist of attendees and process of technical questioning by one of the specialist, Mr George Hartmann of BPW.

As food for thought, with the transport industry demanding, yet lacking resources in respect of trained and knowledgeable vehicle technicians in many different facets, road and infrastructure technicians needed, as well as in respect of the training of the many officers themselves. It is time that we see the Universities, Technicon’s and FET colleges taking an active role in partnering the event.

Once again, the event being a massive success, we hope that it remains and gains momentum through further backing and partnership, allowing the event to expand, we ourselves remain committed.

From 1996 to 2019. That's the 53-year period FleetWatch technical correspondent and industry trainer Dave Scott has … END_OF_DOCUMENT_TOKEN_TO_BE_REPLACED

We previously alluded to a rather large, full-scale research project in considering the effects of a Sudden deflation of a steer wheel tyre on a commercial vehicle, … END_OF_DOCUMENT_TOKEN_TO_BE_REPLACED

Following the utter chaos created during 2020 into 2021, essentially termed “Years-COVID”, resulted in a rather difficult two years. Most notably, 2021 saw a rather … END_OF_DOCUMENT_TOKEN_TO_BE_REPLACED

The nature of any expert report, or for that matter any specialised report is typically for use in litigation; be it Criminal or Civil or perhaps to a lesser extent … END_OF_DOCUMENT_TOKEN_TO_BE_REPLACED