ROADSIDE MEMORIALS – FRIEND OR FOE?
WORDS & PICS BY: TIMOTHY WILL
Given South Africa’s high fatality rate in motor vehicle collisions, more and more people are turning to improvised memorials to highlight the death of a loved one on any given particular stretch of road.

Roadside memorials are a familiar site to any road user in Southern Africa and the rest of the world. Although the practice of erecting a roadside memorial has been around for some time, it has recently 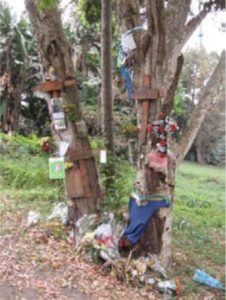 brought on some controversy.
The form of roadside memorials may vary from a bunch of flowers, to a more permanent reminder such as a cross or a plaque, sometimes they are decorated with pictures, poems or trinkets, an example of this is seen alongside. For the people that erect a roadside memorial, the sites mark the spot where a loved one was last alive and is a place where they can make peace with the tragic event that has forever disrupted their lives. By erecting a memorial, it has been said that it helps with the grieving process and can provide comfort from an often unexpected violent and traumatic death of a loved one.
Flowers from families and friends are often placed at the scene within hours of receiving word as to what has happened. This is then 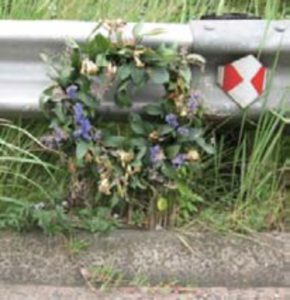 usually followed by a more permanent structure for when family and friends wish to visit the scene so they may pay their final respects. For this event that has forever shattered a families’ life, the need to know where and when and how the accident occurred is of paramount importance. Some families who have lost a loved one, place flowers at the site annually, to help keep their memory alive. This serves as a reminder to other motorists and echoes to the ‘Lost but not forgotten’ memorials for those lost at war, as a result, these memorials create a strong emotional bond between the families and the crash site.
Another aspect for those who erect a roadside memorial is that it serves as a reminder of the dangers of driving and to draw attention to a particular bad section on the road and that they highlight the failings of the authorities in their quest for zero tolerance. On the flipside, those opposed to the erecting of such memorials would argue
that once the flowers have died and the site becomes neglected, they become an eyesore and a nuisance, further to this, there may be the situation where unnecessary rubbernecking and having to occasionally dodge grieving family
members who cross busy roadways in order to get to the memorial could pose a danger..
The global phenomenon of placing a memorial at a site of a fatal accident has spawned small industries
where in the US for example, a website will for $100, have a memorial delivered to your doorstep.
(www.roadsidememorials.com). Another one, perhaps somewhat more macabre, promises to have the
cross implanted into the ground within ½ hour or less of a fatal accident. (www.drivewithcare.com)
The flourishing of roadside memorials, particularly in the US, has led some states to introduce a form
of legislation to regulate the practice of erecting roadside memorials. Some states ban the erection of
memorials altogether whist others impose a one off fee for the erection of a memorial.
Local authorities are reluctant to tell people how and where to grieve, but have to act if the memorial
deems to be a nuisance or a potential hazard. In New Zealand, local authorities themselves erect small
white crosses at the scenes of fatal accidents.
The US State of Delaware is taking an innovative approach to the problem by establishing a memorial
park which features a reflection pool and a wall featuring bricks with the inscriptions of the names of
the deceased. This is done in the hopes of discouraging roadside shrines. Other states allow roadside 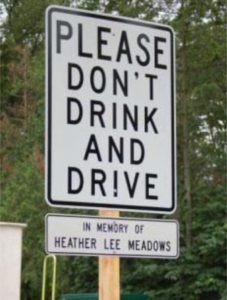 memorials to be erected but after 3 months, they are removed.
Another approach which seems to satisfy the authorities and the grieving
families is for the family to pay the local authorities a once-off fee and a road
sign is erected warning the motorists not to drink and drive, or to buckle up,
as is seen alongside. With respect to South Africa, if Local Government
where to introduce legislation regulating the erection of roadside memorials,
the best way forward would be to allow the grieving families erect a
temporary memorial, but it is then to be removed after six months and be
replaced with permission and at the cost of the family for a more permanent
structure as shown in the examples. Initially this policy may not prove to be
popular as the removing of the memorials may be seen as somewhat heartless
and cruel. 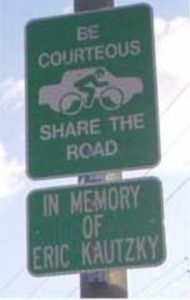 When entering into a discussion to erect a memorial, the local authorities should
aim for a compromise with the bereaved family as this is usually an extreme
sensitive time for the families as they will be grieving. Over time this will go a long
way to keeping the erection of memorials in check, this will prevent any
unnecessary nuisance caused by memorials that have been erected in any dangerous
area or that have become neglected over time and have become an eyesore.
If the cross were to remain, it should be constructed of a breakable material such as
wood, that if a further accident occurred at the same location, that this would
prevent the cross itself becoming a danger. A death from the result of a memorial, either by it causing a
distraction, or by its physical contribution to injury could raise other issues such as, who could be held
responsible?
I requested information for any policy for dealing with roadside memorials from both the South African
National Roads Agency (SANRA) and the Department of Transport (DOT), but the response from both
parties, have been mute on the subject.
REFERENCES:
www.accidentspecialist.co.za
www.brake.org.uk/index.php?p=693
www.roadtraumasupport.com.au
www.highwaymemories.org
www.wikipedia.com
www.drivewithcare.com
www.roadsidememorials.com

We previously alluded to a rather large, full-scale research project in considering the effects of a Sudden deflation of a steer wheel tyre on a commercial vehicle, … END_OF_DOCUMENT_TOKEN_TO_BE_REPLACED

Following the utter chaos created during 2020 into 2021, essentially termed “Years-COVID”, resulted in a rather difficult two years. Most notably, 2021 saw a rather … END_OF_DOCUMENT_TOKEN_TO_BE_REPLACED

The nature of any expert report, or for that matter any specialised report is typically for use in litigation; be it Criminal or Civil or perhaps to a lesser extent … END_OF_DOCUMENT_TOKEN_TO_BE_REPLACED